Here are some examples. 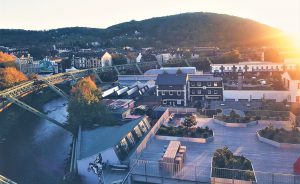 Elberfeld is one of the most centrally located and populous Districts in Wuppertal.

Not far away from the "City-Arkaden" shopping center, which is near the main train station. A few hundred meters away you will find the lively Luisenviertel, it is filled with small individual boutiques and inviting restaurants which represent the special feature of this district.

There is also the opportunity in Elberfeld to discover the traditional square Neumarkt, the Laurentiusplatz (square in the Luisenviertel), the magnificent Stadthalle (city hall) and the Briller Quarter with its old town villas from the Wilhelminian period. 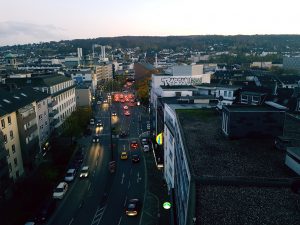 The Barmen district is the counterpart to Elberfeld. Both have their own town center and a connection to the federal highway B7. Barmen is crisscrossed by numerous listed buildings. Here you will find the Kirchliche Hochschule (a Religious High School) Wuppertal / Bethel, the Justizvollzugsschule Nordrhein-Westfalen (Correctional School) and the Helios clinic. In addition, Barmen is characterized by the Waldfrieden sculpture park with works of art by Tony Cragg and by the opera of the city of Wuppertal. Barmen is also known for the opera and the Friedrich Engels house. ..
.
.

The Vohwinkel district to the west is - after Elberfeld and Barmen - the third largest district of Wuppertal. The former knight's residence “Lüntenbecker Schloß”, the historic Vohwinkel town hall and the Genhard building of the former silk weaving mill at the Kaiserstreet. are some of the most famous buildings in Vohwinkel. According to the Guinness Book of World Records, Wuppertal boasts the world's largest one-day flea market (or: can pride itself on) which takes place once a year, traditionally on the last Sunday in September.

Finally, on the eastern edge of Wuppertal are the districts of Langerfeld and Beyenburg, which form a borough and were part of Barmen when it was unified in 1929, with a total population of 24,805 (2018).

Langerfeld (population approx. 21,000) belonged to the Westphalian district of Schwelm until 1922. Worth seeing here is the multifunctional cultural center Bandfabrik in one of many former ribbon weaving mills in Wuppertal. There is also the youth center "JULA" and a children's museum in the listed Villa Beckmanshagen. In 1986, it was the first museum of its kind in Germany and the only one to present art by children and for children. The exhibition includes about a hundred exhibits, and the target audience is not limited to children.

The historic center Bayenburg (approx. 4,000 inhabitants), situated on the reservoir of the same name and in a loop of the Wupperschleife, was first mentioned in documents in 1303. Around this time, a monastery was founded. The most important building is the Beyenburg Monastery Church of Saint Mary Magdalene, also called "Beyenburg Cathedral", built in the 15th century. In the church there is the Chapel of the Cross, where part of the relics of St. Odilia of Cologne, the patron saint of the Order of the Knights of the Cross, are kept.

Cronenberg is the southernmost district in Wuppertal. Particularly worth seeing is the historic town center with its slate cladding, half-timbered houses and churches.

. Ronsdorf: The Wilhelminian-style building, which housed the post office from 1893 to 2010, is worth seeing. As a former ribbon-cutting town, a ribbon-cutting memorial, including a ribbon-cutting museum, should not be missing here. This used to be a technical school of ribbon twisting.

The Briller Quarter is located in Elberfeld and is one of the largest Wilhelminian-style villa areas in Germany. There are more than 245 listed houses within the quarter.

North of the valley is the Nordstadt, built in the 19th century, which can be seen by the characterization of old houses in the style of historicism and the Wilhelminian period. . The quarter is one of the largest contiguous areas of old buildings from the Wilhelminian period in Germany. It is very popular for movie producers as a location set.

Not far away from the city center you will find the lively Luisenviertel, it is filled with small individual boutiques and inviting restaurants which represent the special feature of this district.

The two neighborhoods are located in Barmen to the north and south of the Wupper River.

. Heckinghausen:It was first mentioned in a document in 1466, dye works of the textile industry settled in the 18th century. A simple memorial plaque on the house at Heckinghauser Str. 162 commemorates the home of Friedrich Bayer, who, together with master dyer Johann Friedr. Weskott founded the predecessor of today's global company Bayer AG in 1863. In the 19th century, the district grew together with the then city of Barmen. It merged in 1929 into what later became Wuppertal.

Wichlinghausen:It was a historically grown quarter, was first mentioned in a document in 1384. In modern times, i.e., from the 16th century onwards, the burgeoning textile industry in the valley of the Wupper ensured increasing settlement. Numerous buildings from the Wilhelminian period and typical mountain half-timbered houses characterize the quarter, which was largely spared the destruction of the Second World War. The Wilhelminian-era factory buildings of the ribbon weaving mills located here, among others, are now often home to apartments and artists' studios.

Situated in the northeast of Elberfeld, the high-altitude neighborhood, which belonged to Neviges (now part of the city of Velbert) until 1975, has retained its village charm. This can be seen, for example, in numerous festivals, such as the three-day fire department festival, which is attended by several thousand people every year in May. Another event is the shooting match festival, which also attracts onlookers from all over the surrounding area to Dönberg at the beginning of July.

The Schöller/Dornap neighborhood is located in the northwest of Wuppertal and is part of the Vohwinkel district. In 1975, it was formed from two areas incorporated into Wuppertal, Schöller, which had previously belonged to the Gruiten district (now part of the city of Haan), and the former district of Dornap, as well as a strip that had belonged to the independent Vohwinkel until 1929.

Large areas of Dornap is taken up by five limestone quarries, which have shaped the place since time immemorial. Limestone has been quarried here since the Middle Ages. But the real boom in the limestone industry did not come until the 19th century. The large quarries have eaten into the landscape, and huge spoil heaps look like forested mountains.

The parish church of Schöller is one of the few monuments of medieval architecture in the city of Wuppertal. The restaurant "Haus Schöller" was built in the style and with original parts of a Bergisch half-timbered house and was also used as a community center for a time.